The Last Wish Audiobook is the first of the two collections of short stories preceding the main Witcher Saga, written by Polish fantasy writer Andrzej Sapkowski. The collection contains six short stories interspersed with a continuing frame story; Geralt of Rivia, after having been injured in battle, rests in a temple. During that time he has flashbacks to recent events in his life, each of which forms a story of its own. 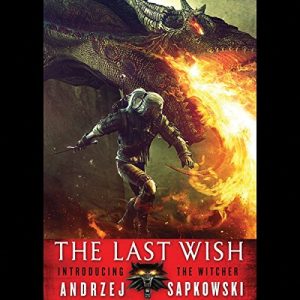 The Last Wish Audiobook is a popular Fantasy Novel written by Andrzej Sapkowski. The book was originally published in 1993. It follows the genre of fiction, fantasy, novel, and romance. The book has a rating of 4.2-star review on Goodreads.

The Voice of Reason begins with Geralt, slumbering, awakened by the entrance of Iola, who proceeds to make love to him. Afterward, he falls asleep. Here Geralt dreams of his encounter in Wyzim with a striga. The story begins with Geralt entering Vizima. Shortly afterward, he kills three men in a bar fight. He is escorted to Velerad, the elderly castellan of Vizima. Near the beginning of King Foltest’s reign, he got his sister, Adda, pregnant. Both Adda and her baby daughter died shortly after birth and were buried together in a double coffin. Seven years later, the daughter awoke, having become a Striga, and slaughtered the inhabitants of the palace.

In 2011, Polish Prime Minister Donald Tusk gave U.S. President Barack Obama diplomatic presents, as is custom, on his visit to Poland. One of these was a signed copy of The Last Wish.

Andrzej Sapkowski is a Polish fantasy writer who was born in Poland in August 1948. He is best known for his book series, The Witcher. His books have been translated into about into more than twenty international languages.

The Last Wish Audio is given below in 1 Complete part which includes all the chapters of the book, Start listening to it and enjoy.