The Shining Audiobook is written by an American author Stephen King. It is the author’s third novel. The cover artist for the novel is Dave Christensen. After the emergence of this book the Stephen King came as a preeminent author in the field of horror. The best-suited genre for this novel is horror, gothic novel and psychological horror novel. The novel was followed by Doctor Sleep. This book was released on January 28, 1977, by Doubleday publishers. 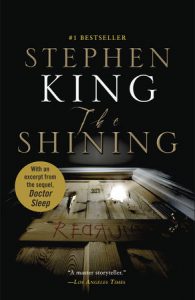 The Shining Audiobook – Review And Details:

The Shining Audiobook got a huge success after its release, King’s most famous story and also a piece of literature. The recurring themes followed by the author in this novel are isolation, time, the supernatural, violence, family, mortality, language and communication, alcoholism and domestic violence.  The iconic horror movie having the same title was also made of this novel.

The Shining Audiobook is a popular horror fiction novel written by Stephen King. The book was originally published on January 28, 1977. It falls under the genre of Horror fiction, Gothic fiction. It has a rating of 4.2 Star Rating on GoodReads.

Jack Torrance now became a responsible man after getting fired from his teaching job at a prep school in Vermont. He now works as a winter caretaker at the Overlook Hotel in Colorado. Danny, Jack’s son was afraid of the Overlook, because of the warning visions Tony (his imaginary friend) sent him. Dick, the hotel’s head cook recognizes Danny’s psychic powers. Danny often slips into trance states and starts talking with his imaginary friend Tony. One day Danny explores a naked, bloated corpse of a woman in a bathtub, he ran away and told his parents about this. Jack also saw the shadow behind the shower curtain. In the end, Wendy, Danny, and Dick escape the hotel after facing the matter of life and death.

About the Author (Stephen King):

Stephen King was born on 21st September 1947. He is an American author of suspense, supernatural fiction, horror and fantasy novel. Approximately 200 short stories were written by him and about 61 novels. He received World Fantasy Awards.

The Shining Audiobook is given below in 16 parts which include all the chapters of the book. Start listening to it today and Enjoy it!