Pride And Prejudice Audiobook is the novel written by Jane Austen and was published on 28th January 1813. It is a romantic novel of manners. The nature of the novel describes the improvement and advancement in the personality of Elizabeth Bennet, who is the dynamic leading character of the book. The main role that is played by her in this novel is to learn about the consequences of swift and quick judgments’ and in turn can grasp the full implications of apparent and actual goodness. Its comical aspects lie in a candid portrait of manners, education, money, and marriage. 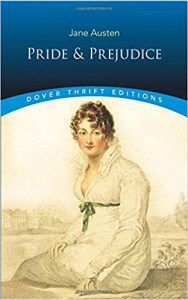 Pride And Prejudice, speak highly of, one of the greatest novel in romances in British Literature. The comedy portion of this novel entertains readers with the fluctuations in the relationship between Elizabeth Bennet and Mr. Darcy. Nevertheless, this novel in addition to a simple love story is also considered in developing a more clear view of matrimony. It is not wrong to say that this novel informs us about Jane Austen’s opinions towards matrimony. She emphasizes on the point again and again that marriage is all about economics and business here in our society.

Pride and Prejudice Audiobook is a popular novel written by Jane Austen. The Novel was originally published on January 28, 1813, in England. It follows the genre of Romance Novel, Historical Fiction. It has a rating of 4.2 Rating on Goodreads.

Mr. Bannet and Mrs. Bannet are very desperate to sell all their daughters to get married, from the oldest to the youngest i.e., Jane, Elizabeth, Mary, Kitty, and Lydia. Elizabeth is a good girl, looking after her four sisters but is self-directed and stubborn. Bennet family is invited by Mr. Charles Bingley, a rich bachelor, to attend the Meryton Ball. Mr. Bingley is cheerful and is mingled with all the guests, but is very attached to Jane Bennet. Mr. Darcy is Bingley’s friend and is a wealthy bachelor too. He is very unkind to Elizabeth. Later on, as the story proceeds, Mr. Darcy finds himself to have feelings for Elizabeth. Elizabeth visits Mr. Darcy estate and there Mr. Darcy tries to solve all the misunderstanding that results in a lot of complications in between them and the two fall in love with each other.

In Pride and Prejudice Audiobook Elizabeth’s youngest sister secretly run away with Mr. Wickham. Mr. Darcy gives some amount to Wickham to marry Lydia, solving the scandal that threatens the Bennet family. In the end, the two elder sisters of Bannet family found true love.

About the Author (Jane Austen):

Jane Austen is known for its consummate novelist of manners. Many of her novels describe how women suffer their marriages problems, and how they face joint distinctions of class and relationship.

Pride And Prejudice Mp 3 Complete is present below in one part which includes all the chapters of the book. Enjoy.