A Tale of Good Omens Audiobook, an Angel, and a demon. For personality therapy, Good Omens is an accurate book based on prophecies authored by Neil Gaiman and Terry Pratchett with a page count of 412. The book falls into the category of fantasy, horror, and humorous fiction. It is published on 28th November 2006 by William Morrow. The book was nominated for Locus Award and World Fantasy Award Nominee in 1991. 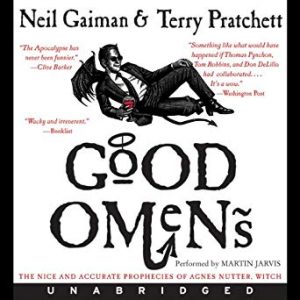 Good Omens MP3 offers a phenomenal story of good and evil where earthly representatives get a chance to discover apocalypse. The story revolves around a demon and an angel. Both of the creatures have spent years together on earth with a good relationship. The story runs fast-paced and smoothes along with the best humor until the demon named Crowley is charged to convey antichrist to a new family. The angel Aziraphale helps the demon to stop the apocalypse. Thus, the interplay between the two characters will hold the reader’s interest.

The simple literature has grasped the interest of readers with an inspirational thought presented in the form of a novel. Good Omens Audiobook is entertaining and philosophical in nature. However, the combined humor presented by Neil and Terry definitely is an absolute win.

Good Omens short TV series is produced by BBC Studios and directed by Douglas Mackinnon. The release date will be in 2019.

Neil Gaiman is a British author of age 57 and fond of writing short graphic novels, comic books, fiction novels, films and audio theatre. His writing is unpredictable and reflects the pleasure of fantasy, fiction, and humor. He cleverly twisted the characters by linking philosophy, humor and plot distinctly.

Terry Pratchett was also an English author who left the world with exceptional comical works on 12th March 2015.  His writings were excellent, a perfect blend of serious and funny aspects. His quirky writing provides delight to the readers with occasional malfeasance and goodness. 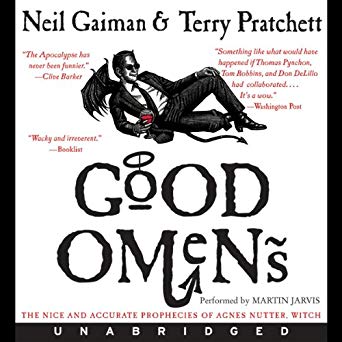