The novel Catch-22 Audiobook was written by an American author Joseph Heller. It is a satirical war novel. The novel portraits the story of World War II, from 1942 to 1944. The cover artist for the novel is Paul Bacon. The novel was published on November 10, 1961, by Simon and Schuster publishers. The best-suited genre for the novel is a dark comedy, absurdist fiction, war fiction, satire, and historical fiction. The novel was followed by Closing Time in 1994. 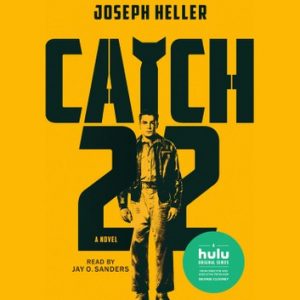 This novel is one of the best novels of the twentieth century. In this novel, the author focuses on the life of Captain John Yossarian, who is a bombardier from U.S. Army Air Forces B-25. Readers felt that one of the frustrating aspects of the novel is the breakdown of communication. This lead to affect even a simple conversation between soldiers. The next theme that the author focuses on his novel is insanity. It can be used to explain how an individual can’t able to learn from his or her own mistakes.

Catch-22 Audiobook is a popular novel written by Joseph Heller. The novel was originally published on November 10, 1961. The book covers the genre of Novel, Historical Fiction, War Story. It has a rating of 4 Star Rating on GoodReads.

Captain John Yossarian belongs to U.S. Air Force and is in charge of releasing bombs during World War II. Yossarian wants to survive until the end of the war. He wants to survive each combat mission he flies, no matter how dangerous it is. On the other hand, Colonel Cathcart increase the number of missions his man must complete. Most of the Yossarian’s actions are in response to the death of a fellow soldier, or to avoid participating in flying dangerous missions. The overall story reveals one man’s struggle to stay alive, having the cold bureaucratic insensitivity.

About the Author (Joseph Heller):

Joseph Heller was born on May 1, 1923, and died on December 12, 1999, an American author of short stories, novels, plays, and screenplays. One of the best examples of his work is Catch-22.

Catch-22 Audiobook is given below in 2 parts which include all the chapters of the book. Start listening to it and enjoy.