A Tale of Two Cities Audiobook is a popular novel written by Charles Dickens. The novel was set in London and Paris just before and during the French Revolution. The novel was illustrated by Habolt Knight Browne, he also designed the cover for the book. The novel can be suited in the genre of historical novel and political commentary. The novel was published in 1859 by Chapman and Hall publishers. It was followed by Great Expectations (1860-1861) and preceded by Little Dorrit (1855-1857). 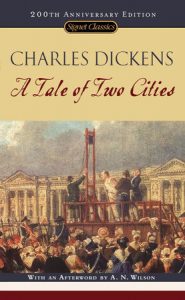 A Tale of Two Cities Audiobook – Review And Details:

The major thematic topics followed in the novel by the author are of revolution, duality, violence, resurrection, centrality of women and aristocratic versus peasant. When it was the worst of the time for London and Paris, as economically and politically, this lead to American and French Revolutions. The motifs that are explained in detail by the author are darkness, duality, and restriction by society. The main characters of the novel are Doctor Alexandre Manette, Sydney Carton, and Charles Darnay.

A Tale of Two Cities Audiobook is written by Charles Dickens. The novel was originally published in 1859. It Falls under the Genre of Novel, Historical Fiction, Social Criticism. The novel has a rating of 3.8 Star Review on Good Reads.

The narrator of A Tale of Two Cities Audio is unidentified and has explained his thoughts and feelings of all the characters belong to the novel. The story is told from omniscient. The author characterizes the women and men more by what they do rather than what the book’s narrator said. Sydney Carton sacrifices his own life on behalf of his friends Lucie Manette and Charles Darnay. The novel plots the story of the conditions that cause the French Revolution and the Reign of Terror.

Charles John Huffam Dickens was a British writer and a social critic. His work includes some of the best-known examples of fictional characters. He was known as the greatest novelist of the Victorian era.

A Tale of Two Cities Audiobook is given below in 5 parts which include all the chapters of the book. Start listening to it today and Enjoy it.